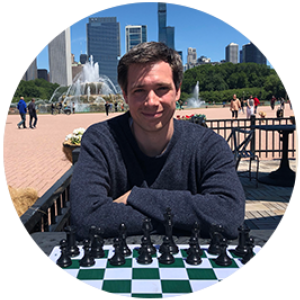 “How many possible chess games are there?” “Will the game of chess ever be solved?” Such questions are mysteries of the universe…

Well, quantum physicist Alex Belsley may not have solved those mysteries of the universe (yet), but this popular Chessable author can certainly help you solve your opening problems.

Wait? He’s a quantum physicist and chess author? “Where does he find the time?” might be another mystery, but I’d say his passion for chess certainly makes it possible!

Alex, better known by his username Chessforlife, has been playing chess off and on for more than 10 years, and he’s always excelled at it. Even when he was a kid he was taking down tournament medals, placing 2nd in the American U10 Championship. He only got better as time went on, too. Alex boasts a 2095 FIDE rating and 2208 English Chess Federation rating.

In addition to analyzing the games of such chess heroes as Bobby Fischer and Garry Kasparov, Alex improved his chess by using Chessable. It was a great study tool for him; not only could he take new chess courses with it, but he could  refine and share his knowledge by creating courses – and make some money doing it.

And he’s not done yet – after 10 courses, he’s still publishing. In fact, when he heard Chessable announce the Create Your Own Course Contest in June, right then and there he created his latest course, The Best Chess Moves Of All Time.

In this incredibly clever combination of chess history and tactical skill building, Alex presents several positions from each of the world champion’s games, as well as other legendary players like Judit Polgar and Anish Giri. The goal is to find the brilliant move that the player did – which is far from an easy task (they are the best of all time, after all).

But, Alex does a great job annotating the moves so you can learn why they are the best and, hopefully, transfer some of those world champion ideas into your own games. You’ll learn about the lives and games of legendary players from Paul Morphy to Magnus Carlsen and witness them in their finest hours.

The Best Chess Moves of All Time may in fact be Alex’s best course of all time, and that’s why we’re pleased to announce that he’s the winner of Chessable’s Create Your Own Course contest. Be on the lookout for the course to hit the digital shelves in the coming weeks – as part of his award, Alex’s course will be presented by none other than Grandmaster Simon Williams!

Congratulations to Alex – Chessable is proud and fortunate to have great community authors like him.

Radjabov refuses to celebrate as battle for 2nd heats up

This website uses cookies to improve your experience while you navigate through the website. Out of these, the cookies that are categorized as necessary are stored on your browser as they are essential for the working of basic functionalities of the website. We also use third-party cookies that help us analyze and understand how you use this website. These cookies will be stored in your browser only with your consent. You also have the option to opt-out of these cookies. But opting out of some of these cookies may affect your browsing experience.
Necessary Always Enabled
Necessary cookies are absolutely essential for the website to function properly. This category only includes cookies that ensures basic functionalities and security features of the website. These cookies do not store any personal information.
Non-necessary
Any cookies that may not be particularly necessary for the website to function and is used specifically to collect user personal data via analytics, ads, other embedded contents are termed as non-necessary cookies. It is mandatory to procure user consent prior to running these cookies on your website.
SAVE & ACCEPT